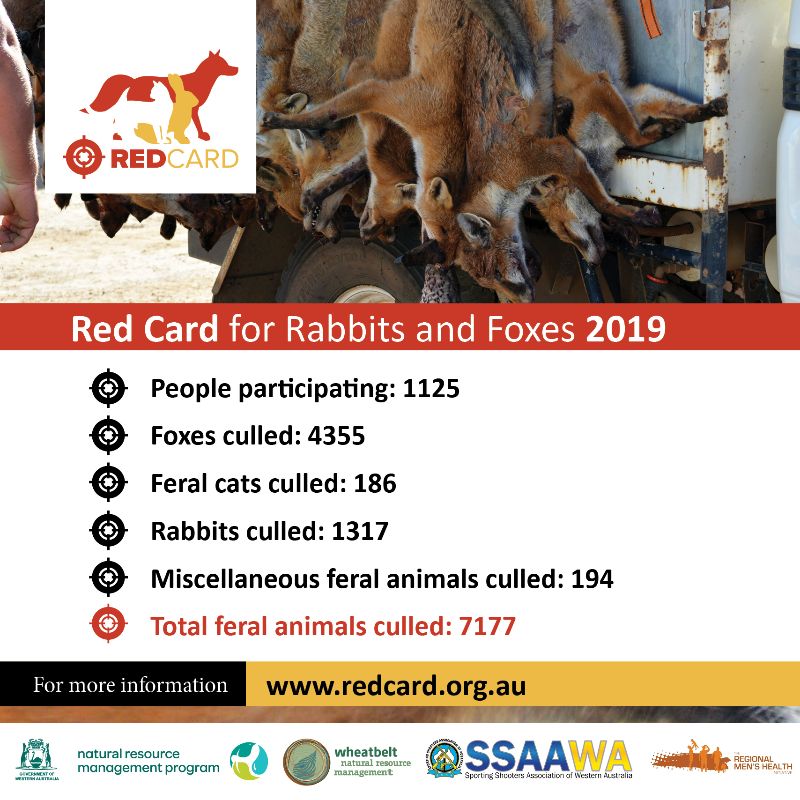 The Boyup Brook fox shoot was held on second weekend in February. Organized By Marc and Erlanda Dees of Rylington Park, saw local hunters and hunters from other shires and Perth form 47 teams that collectively took out record 705 foxes, 170 rabbits, 18 cats and 2 pigs. The event was strongly supported and sponsored by many businesses and organizations. Prizes were presented to winners of various categories. FOXBUSTERS was one of the teams and shot 29 foxes and 1 cat.

Fox 6              Would not come to any caller, so it was perused for about 700m when Ross flattened the 2 ½ Yo female weighing 4.38kg with the 12Ga shotgun.  She had eaten Grasshoppers, Barley and Canola.  One round worm was in the small intestine and she had birthed 6 cubs.

Fox 7              At 80m from an awkward position and a nearly obscured position Ross managed to take this 2.46kg female cub with his .223.  It had a varied diet of Carrion, Beetles, Earwig, Caterpillar, Canola, Earthworms and a Lizard.

Fox 8              Would not come to any caller.  As the barley stubble paddock had numerous bog mark ruts, we slowly followed this 3.20kg male cub for hundreds of metres to where Ross pulled off a running shot with his .223 at 130m over the fence in the next paddock.  This last fox for the night had eaten a Centipede and Beetles

There were 7 other foxes that were seen but not shot at due to distance and lack of opportunity.

FOXBUSTERS as a concept and website is over 7 years old.  the SSAA Australian Shooter magazine (Feb 2016) featured an article on FOXBUSTERS.  since then there has been over 760 requests for the “Secret Weapon”.

April 2019 the Australian Shooter magazine published another article “‘Secret Weapon’ in the hands of thousands”, featuring a thousand copies sent.  By May 2019, another 500 have been sent making over 1500 copies.

Some useful networking is happening – a meeting of like minds is taking place.  There has been only one public speaking event last year with equipment demonstrations and a PowerPoint presentation.

The article in the ‘Shooting Australia’ website entitled “Lady With A Gun”  has been well read.  This lady put to words a an accurate assessment of shooters and the feral animal problem in Australia, which is shared by us FOXBUSTERS.

Over 600 foxes have been examined by necropsy, discovering an amazing variety in their diet.  Vixens examined for pregnancy and/or cub numbers birthed.  As well as stomach contents, the small intestines are examined for parasitic worms (tapeworms and roundworms).

On May 24 2017 FOXBUSTERS®  became a registered Trademark.

Many reports of successful use of the “Secret Weapon” are coming in, but we would like to hear of more of the fox being outfoxed!

Happy Hunting to you all

Foxes are attracted to the sound of an animal or bird in distress.  Logically a distressed animal would be easier to catch and eat. Play this sound, it effectively attracts foxes where they have had experience with catching birds.

Even at night when spotlighting for foxes, when a foxes eyes are seen, switch off the engine and all lights except one spotlight which is shone low keeping the fox eyes illuminated in the upper edge of the beam.  Foxes are known to gallop towards the sound. More on use.

Please fill the form below to request a mp3 copy attached to a reply email.

The European red fox (Vulpes vulpes) was introduced into Australia in the 1870s for recreational hunting. Their subsequent spread was rapid and they are now responsible for environmental and agricultural impacts valued at over $200 million per annum.
In more than 140 years, fox populations exist in most of the favourable habitats suited to foxes.*

There would be over 3 million square kilometres of potential fox habitat in mainland Australia.

In the agricultural areas of Western Australia where the 2012 FOXBUSTERS research was conducted, fox population densities averaged one fox per 0.7 square kilometres (1.4 foxes/km²). We are concerned that there could be 4.2 million foxes in Australia.

Because foxes can jump, dig or burrow and climb, fox-proof fencing is extremely expensive to erect and maintain. Fencing is only an option in specific areas for high value livestock.

1250 volunteers in the 2013 community fox hunts organised by the Red Card for Rabbits and Foxes Programme, culled 4,949 foxes, 418 feral cats and 4179 rabbits in organised annual fox hunts that took place in autumn, across the South West Land Division of Western Australia. **

FOXBUSTERS members are involved in these events, but continue the culling of feral (introduced) animals throughout the year.

There are few natural predators that control fox numbers in Australia. Wedge Tailed Eagles, some snakes, large goannas, feral cats, dingos and wild dogs will sometimes prey on young foxes. Foxes were introduced for sporting purposes, but they now must be controlled.

The colour of fox eyes can vary depending on many things.

A. The colour of the spotlight being used; HID, halogen or coloured filters will have an effect on the retinal reflection colour you see.
B. The age of the fox may have an effect.
C. How directly the fox looks at the light.
D. The distance between your eyes and the light source (reflective angle) can affect the colour.

What colour am I looking for?

Usually greenish yellow. However white, orange and even red eyes can be a fox.
Cats, sheep, cattle and dogs can share the same colour as foxes. The space between the eyes can sometimes determine whether or not it’s a fox.
The movement of the eyes is the next thing to look for. You may see a fox or a cat blink. A fox’s eye may move quickly whereas most other animals don’t move so quickly. A fox may only give a quick glance compared to a sheep for example.
A fox may be seen apart from a mob of sheep, but sometimes within the mob but moving differently to the sheep’s eyes.
Because other creature’s eye reflections are similar to fox, you must identify the animal before shooting.
Cats, sheep, cattle, wolf spider and fox eyes can look similar in colour.

Deer have particularly bright eyes.  They group together quickly and move quickly when startled.
Animals with a more red appearance are kangaroo, possum and rabbit.