Fox 6              Would not come to any caller, so it was perused for about 700m when Ross flattened the 2 ½ Yo female weighing 4.38kg with the 12Ga shotgun.  She had eaten Grasshoppers, Barley and Canola.  One round worm was in the small intestine and she had birthed 6 cubs.

Fox 7              At 80m from an awkward position and a nearly obscured position Ross managed to take this 2.46kg female cub with his .223.  It had a varied diet of Carrion, Beetles, Earwig, Caterpillar, Canola, Earthworms and a Lizard.

Fox 8              Would not come to any caller.  As the barley stubble paddock had numerous bog mark ruts, we slowly followed this 3.20kg male cub for hundreds of metres to where Ross pulled off a running shot with his .223 at 130m over the fence in the next paddock.  This last fox for the night had eaten a Centipede and Beetles

There were 7 other foxes that were seen but not shot at due to distance and lack of opportunity.

Foxes are attracted to the sound of an animal or bird in distress.  Logically a distressed animal would be easier to catch and eat. Play this sound, it effectively attracts foxes where they have had experience with catching birds.

Even at night when spotlighting for foxes, when a foxes eyes are seen, switch off the engine and all lights except one spotlight which is shone low keeping the fox eyes illuminated in the upper edge of the beam.  Foxes are known to gallop towards the sound. More on use.

Please fill the form below to request a mp3 copy attached to a reply email. 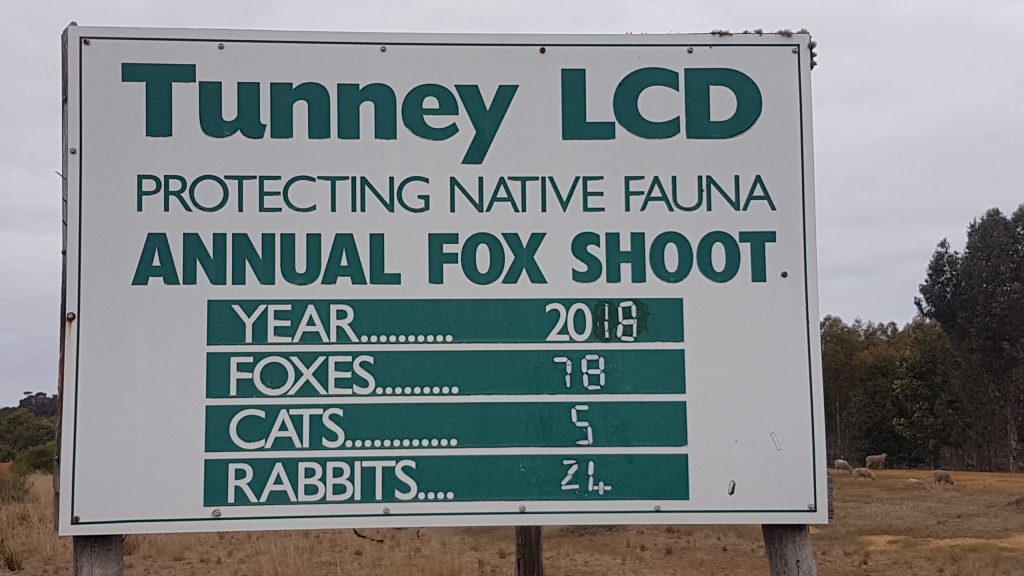 The colour of fox eyes can vary depending on many things.

A. The colour of the spotlight being used; HID, halogen or coloured filters will have an effect on the retinal reflection colour you see.
B. The age of the fox may have an effect.
C. How directly the fox looks at the light.
D. The distance between your eyes and the light source (reflective angle) can affect the colour.

What colour am I looking for?

Usually greenish yellow. However white, orange and even red eyes can be a fox.
Cats, sheep, cattle and dogs can share the same colour as foxes. The space between the eyes can sometimes determine whether or not it’s a fox.
The movement of the eyes is the next thing to look for. You may see a fox or a cat blink. A fox’s eye may move quickly whereas most other animals don’t move so quickly. A fox may only give a quick glance compared to a sheep for example.
A fox may be seen apart from a mob of sheep, but sometimes within the mob but moving differently to the sheep’s eyes.
Because other creature’s eye reflections are similar to fox, you must identify the animal before shooting.
Cats, sheep, cattle, wolf spider and fox eyes can look similar in colour.

Deer have particularly bright eyes.  They group together quickly and move quickly when startled.
Animals with a more red appearance are kangaroo, possum and rabbit.